The Old Sloop: How We Got Here 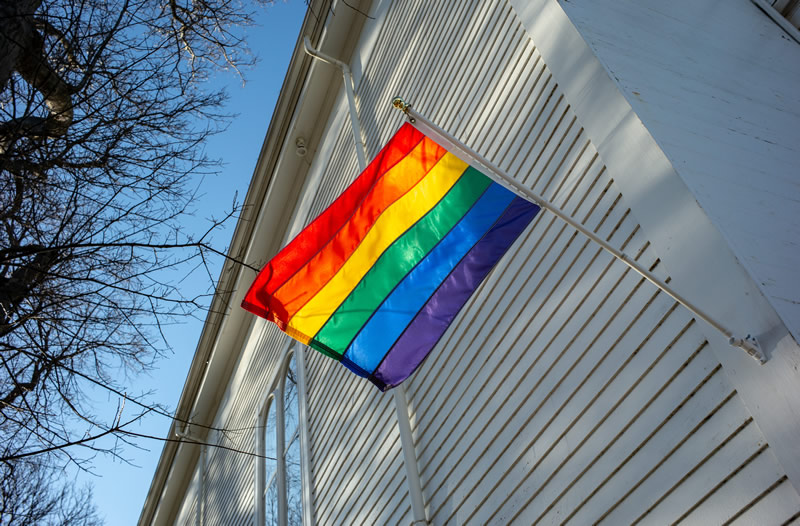 Fondly referred to as the “Old Sloop” (a name conferred by local fishermen in the 1800s), our church has long been a community meeting place, a beacon of faith, and an unwavering voice for social justice. We carry on those traditions through worshiping together, growing in faith and Christian education, and taking a passionate, proactive stance for social justice.

Through the expanded history below you will come to understand the roots of the Old Sloop’s stance on condemning slavery and advocating for abolition as well as our connection to the War of 1812 and the Civil War. You will learn why we have a replica of a cannonball in our steeple! And you will see how our early roots have given rise to more recent historical events, including our becoming an open and affirming congregation, addressing issues of race, engaging in advocacy to end homelessness, and continuing care for the structure itself.

In 1606 the French explorer Samuel de Champlain made his second trip to Cape Ann and had a peaceful encounter with some of the 200 Native Americans who were living in this area during the summer months. While here he drew a map of Gloucester harbor which he called le beau port. Thus giving rise to the Beauport name frequently seen in the area today. Captain John Smith sailed along the waters of this cape in 1614 and named the area Tragabigzanda in honor of a Turkish woman who had helped him when he was a prisoner in her country. However, when Smith returned to England, Prince Charles changed the name to Cape Ann in honor of his mother, Queen Ann, and designated the territory visited by Captain Smith on that voyage as New England.

The first permanent settlement on Cape Ann was established by Reverend Mr. Blynman, who settled here with fifty people. As early as 1633, colonists “met and carried on the worship of God among themselves, read the word of God, prayed to Him and sang His praises.”  The first church in Gloucester was officially gathered in 1642 by the Reverend Mr. Garish, who was then preaching in Wenham. Reverend Mr. Blynman became the first pastor. The second church was organized at the West Parish (in West Gloucester) in 1716, with Reverend Samuel Thompson as their first pastor. Next was the parish located at ’Squam (Annisquam), where Rev.  Benjamin Bradstreet was installed as pastor in 1728. The fourth parish was organized in the Harbor (Gloucester) with Reverend John Rogers as its first pastor. 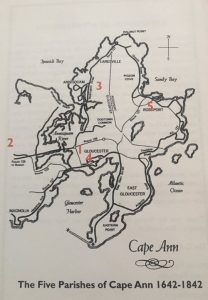 Prior to 1755 churchgoers from Sandy Bay made Sunday treks on foot and by horse in good weather to the parish in Annisquam or the First Parish in Gloucester. In 1738 the parish at Annisquam made overtures toward building a joint meetinghouse between itself and Sandy Bay.  It is said that the beams for the never completed  framework could be seen for many years. In 1724 the first log schoolhouse in Sandy Bay was built on the front slope of the present church. Religious services were held there when bad weather made it impossible to travel to another Gloucester church. Thus it was that in 1755, the Fifth Parish of Gloucester was established, composed of people residing in Sandy Bay and Pigeon Cove.

The Fifth Parish and Sandy Bay were one entity. There was no separation of church and “state.” Its first meetinghouse was built on Cove Hill, near where the Baptist Church is now located. It was a small, two-story, squarish building, with a balcony and galleries extending under the side windows. There was neither spire nor bell. Hymns were “lined out” by the pastor or one of the deacons, with no musical accompaniment. This meetinghouse served the parish until after the Revolutionary War.  In 1804/1805 a new meetinghouse was built where it stands today. It had about twice as much floor space, a steeple, and a small Paul Revere bell. Otherwise it was much like the original building, with a balcony and galleries under the upper level of windows. The log school house was removed in 1797 and the original 1755 meetinghouse was put up for sale in 1805.

On September 8, 1814, the British frigate Nymph invaded Sandy Bay.  Still unsettled by the loss of the American colonies, the British had launched what we know as the War of 1812. One of the Nymph’s barges surprised and captured the barracks at the end of Bearskin Neck. When a second barge was seen entering the Old Harbor, residents rang the Old Sloop’s bell to sound the alarm. The crew shot at the bell to silence it, but hit the steeple instead. Firing the shot caused a hole in the bottom of the barge. The cannon fell through the hole, the barge sank, and the crew were captured as they swam ashore. Their captain made an exchange of prisoners and promised not to bother the town any more. The Old Sloop still has the original cannonball. A brass replica in the steeple was added during its later reconstruction.

In 1840 the people of Sandy Bay voted to establish the Town of Rockport.  At that time, the meetinghouse was completely redecorated and the steeple enlarged. Two years later the state released the meetinghouse to the congregation. Thus, the First Congregational Church of Rockport was officially established as a separate entity from the town. A year later, led by the Rev. Wakefield Gale, who had ties to Abolition leaders in Boston, the congregation voted a strong, comprehensive resolution of support for abolition:

Whereas it is the duty of every Christian church to bear testimony against all kinds and degrees of sin, especially against such forms of iniquity as are open and extensively injurious to man; and whereas it is deemed important that this church make an explicit and public expression of their sentiments in relation to slavery, and believing this can be done without producing any of the evils arising from debate and contention among brethren, and with entire unanimity, therefore.

Resolved, that we regard slavery as a great physical, political, social and moral evil, involving enormous injustice and wrong, destructive of the best interests of the community where it exists, dangerous to our country, oppressive to men and offensive to God.

Resolved, that buying and selling men for gain, holding and treating them as mere property, working them without wages, degrading and sundering their domestic relations, keeping them in involuntary ignorance and incapable of searching the scriptures for themselves, the oracles of God,  is in all cases and under all circumstances a grievous injury to the enslaved and a sin against God, and ought like every other sin to be repented of and immediately forsaken.

Resolved, that while we are constrained to receive one another as Christ has received us, and must therefore fellowship with all members of Christian churches who bear the image of Christ and bring forth the fruits of the Spirit, we nevertheless can have no fellowship with this work of darkness and iniquity, but must rather reprove and rebuke those who encourage and persist in it.

Resolved, that we regret there should be in any part of our country professed ministers and followers of Christ who justify involuntary servitude as a permanent condition of society and a scriptural institution, which we regard as obviously contrary to the principles of justice and the spirit of the Gospel, and which is condemned by the opinion and example of a large proportion of the civilized world.

The Old Sloop was a powerful recruiting station during the Civil War. Rockport’s people contributed significantly to that war effort. In 1865 former President Franklin Pierce stood on the green in front of the church and greeted soldiers returning from the Civil War.

From 1855 to 1870 the congregation grew to the extent that there was not enough room for everyone to be seated comfortably in the meetinghouse. So the Second Congregational Church was established at the corner of School Street and Broadway. (The building still exists as condominiums.) The two congregations reunited after the Civil War.  In 1872 the Old Sloop building was cut in half and separated by about twenty feet. An addition was built reconnecting the two sections and enlarging the seating area to its current size. At that time the steeple was enlarged and strengthened to accommodate a new and heavier bell (cast in 1876) and the Town Clock. The two levels of windows became the beautiful, tall windows you see today.

After the Civil War the sanctuary was decorated in Victorian style with marble plaques, a dark wooden balcony, and elaborate woodwork. When the weathered condition of the steeple led to its rebuilding in 1937, funds were raised by public subscription as would have happened in the early Fifth Parish days. At the bicentennial of the First Congregational Church in 1955, a major redecoration of the interior was completed. Through two decades the pastors and the congregation worked to restore the building to its original design, culminating with the installation of a new Andover organ in 1974/75. 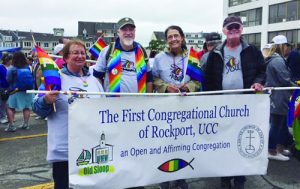 We took another important step toward social justice in 2007. After years of prayer and study, on May 20 our congregation voted for this church to become Open and Affirming/ONA. 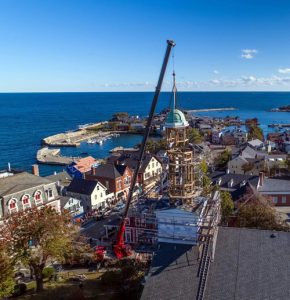 In 2009 the steeple was again found to be deteriorating, and a project to repair the damage began in 2015. The damage was found to be extensive. The entire steeple except the dome at the top was replaced as was most of the clock tower structure beneath. We launched a “Save Our Steeple” campaign to raise funds for this million dollar project from the congregation and community. Public funds through the Community Preservation Act played a part. The bell was replaced, and a granite base to memorialize the retired bell hosts a plaque that reads: 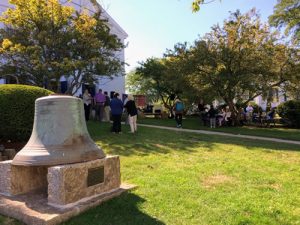 Cast by William Blake, a bell maker who apprenticed with Paul Revere, this bell replaced the original Revere bell in 1879 and served the First Congregational Church and the Town of Rockport until a crack forced its retirement in 2017. It was replaced by a bell cast by Henry Hooper, another former Revere apprentice.